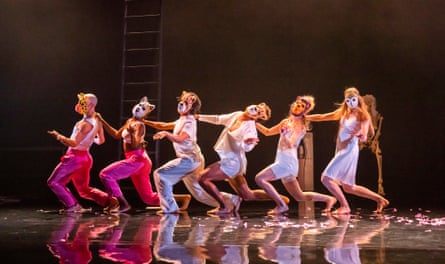 Owell, hats off to Ben Duke and his company Lost Dog for sucking up all the candy-colored joy of Christmas. While the sweet sugar of the Royal Ballet Nutcracker plays on the main stage upstairs, downstairs we are in the grim darkness of the classic underworld.

Hades himself (Jean-Daniel Broussé), perky in a see-through robe, underscores the contrast, noting that our choice to sit shrouded in darkness says as much about the audience as it does about the spectacle. “That’s 90 minutes you’ll never get back,” he adds. “That’s culture. You never know what you are going to get.

In reality, Ruin makes you glad you took the bet. Duke continues the exploration of how we tell stories and who we transform into the heroes who marked his entire career by turning his gaze to Medea, fresh from her desperate murder of her children and put on trial at the request of her ex-husband, Jason.

With its water cooler of oblivion, and Hades and Persephone playing defense and prosecution attorneys in pink suits, the show’s mix of word and dance is fabulously spiritual, but also lavish in its physical invention. . Liam Francis’ Jason flips over on a stretcher in a display of stretched limbs, struggling to find his feet in his new surroundings.

When he meets Hannah Shepherd’s mighty Medea, he stands naked as she hesitantly covers him in the balm that will save his life. He seduces her with an embarrassingly seductive kick of the hips – a dance he would later repeat to win his second wife. Later, as Medea struggles to find her children, she is raised and brought down by black-clad figures as a tormented resurrection of Bill Viola, struggling for a redemption she cannot find.

The music – live from exceptional musicians and singers – ranges from Rachmaninoff to George Harrison and is always both relevant and moving. The dancers, including the magnificent Miguel Altunaga, swaggering like a sad Lord of Misrule, are all exceptional. The effect is deeply emotional and is as much about love and giving as any Christmas spectacle.